“The Country’s #1 Comedy Class With A Proven Formula For Making You Funny(ier)!”

Jeff Justice’s Comedy Class Has Been Making People Like You Funny(ier) Since 1990.

Join us ONLINE for Jeff’s

COMEDY CLASS GRADUATION SHOW
MAY 10TH  8:PM AT THE PUNCHLINE!

“I wanted to congratulate you on being a very good teacher of comedy. I had move away from Atlanta for a short time and since there were very few open mics where I was I decided to take a class so I could stay sharp. After just a few weeks it was clear to me that you were on a different level than a lot of other people who claim to teach comedy. You really are one of the best teachers in the country. I can clearly see why your classes are always full.”

I absolutely had a BLAST at The Punchline, and the class is amazing in so many ways! My e-mails, letters, etc. are all better since I’ve learned to eliminate useless words. Thank you so much!!
You have a gift for enabling people to get in touch with something inside, and it was amazing to experience within myself and watch the others in the class blossom.
Thanks again for an incredible journey!!
– Debi Merchant

The Next Set Of Classes For 2021 Starts

Jeff Justice’s Comedy Class Graduates are knocking it out of the park!

Jeff’s comedy class has been making that dream come true for people like you for almost three decades! Perfect for those who want to become a comedian and for business people who want to communicate their ideas more powerfully!

Can you imagine your coworkers actually listening to you at meetings? What a concept! Some businesspeople sign up for the Comedy Workshoppe for the knowledge, skills, and coaching but choose not to graduate at the Punchline. 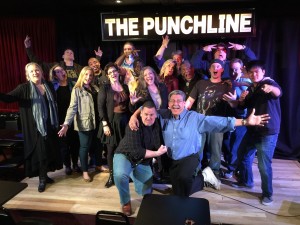 Imagine Hearing Uproarious Laughter and Thunderous Applause at The Punchline Comedy Club and it’s All For You!

“Jeff, I can not thank you enough for your comedic wisdom and guidance these past few weeks. I must come clean and admit that at the beginning of this class I had my doubts. I was afraid this stand-up workshop would turn out to be, pardon the pun, a joke. But it’s been hours since I’ve walked off the stage and I’ve still got a high. I’m at a loss of words and cannot accurately describe what is was like to have a massive crowd of people laugh at everything I said, by design. Thanks for putting up with some of my not so funny attempts and steering me in the right direction. Thank you, thank you. Not only am I eager to brave a few open mic’s, I’m definitely looking forward to joining the level two program as well. Thanks so much Jeff. Seriously.”

“I was shocked by how much professional help we got rewriting our jokes.  You are amazing”!

Thousands of graduates agree
“If you want to be funny, send Jeff money”!

“I can’t tell you how many times I have used the techniques I learned in your class in everyday life.

Jeff has been refining his teaching techniques since 1990 with excellent results. He is considered the top teacher of stand-up in the Southeast. Many of his students have gone on to achieve great success in business, comedy, acting, storytelling and public speaking as well as in their personal lives.

This is the only comedy class in the country that the instructor will help you rewrite your jokes and make them funny. Jeff will never let a student go on stage without funny material.

The comedy class is taught at the Atlanta Punchline Comedy Club which is connected to the Landmark Diner on Roswell Rd in Buckhead.

The Graduation for the comedy class is also at the Atlanta Punchline. Guaranteed to be one of the most memorable nights of your life.  Jeff promises his students that if they do what he asks them to do, which is the homework, that there is no way he will let them go up on stage for the comedy class graduation and not be funny!

Don’t delay, sign up today.  You have nothing to lose and everything to gain.  The classes are from age 17 to 100.  Our oldest comedy class graduate to date was 85 years young!

I feel like million dollars! This class is the best thing I've ever done! Jeff totally convinced me to clean up my act. Every joke Jeff told me to do killed! - Eric Hollis